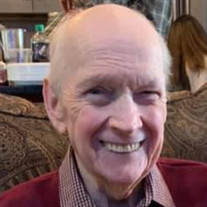 William “Bill” Lawrence Travis, age 82, passed away on January 16, 2020, at his home in Columbia, Tennessee. Bill was born on March 10, 1937 in Old Hickory, Tennessee to the late Marvin Wilbur Travis and Mary Violet Hall-Travis. He was a Senior Technical Illustrator and worked on many government contracts with Brown Engineering, Avco Lycoming, General Dynamics and Lockheed Martin, relocating him from Alabama to South Carolina to Texas where he retired before moving to Columbia, Tennessee. He had artwork featured in the Smithsonian and received multiple awards throughout his career. Bill was known as an “Illustrator’s Illustrator.” Some of his projects included helicopters used in Vietnam, rockets and missiles for Nasa and the F16s and F17s with General Dynamics and Lockheed Martin. He loved golf, watching thunderstorms, wildlife and watching westerns, especially those with John Wayne. He was a strong man of faith who studied the Bible and loved the Lord. He looked for the good in all people, and was always there for anyone who needed him. Bill is survived by his wife of 63 years: Ann Sue Travis; daughters: Renee (Gary) Nealy of Columbia, Tennessee, Kim (Michael) King of Houston, Texas, Kala Dunn of Dallas, Texas; grandchildren: Brooke Lamb, Brian (Candace) McDowell, Blake McDowell, Jason (Kelly) Henshall, Travis (Stacy) Henshall, and Kyle (Samantha) Henshall, Hunter Bothmann, Taylor Hasselbeck and Cooper Dunn; 27 great-grandchildren and 1 great-great grandson, brother: Jimmy (Melba) Travis; and many nieces and nephews. He was preceded in death by his parents, and sisters: Jean Allison and Peggy Salamone. Visitation will be Monday, January 20, 2020 from 6:00 PM until 8:00 PM at Patterson-Forest Grove Funeral Home. Family will also visit with friends on Tuesday, January 21, 2020 from 12:00 PM until time of service at 1:00 PM. Interment will follow service in Highland Memorial Gardens. Grandson, Brian McDowell, officiating.

The family of William "Bill" Lawrence Travis created this Life Tributes page to make it easy to share your memories.

Send flowers to the Travis family.