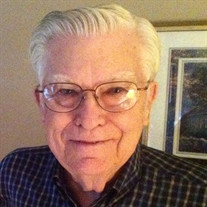 Wilbur Doyle Ramsey ascended into Heaven and the loving, waiting arms of his wife, Dorothy and their son Richard, on August 20. He was surrounded by his devoted daughter Sharon Ramsey Bush, son-in-law William R. Bush, Jr., and only granddaughter, Shannon Bush. Wilbur was born to Effie Mae King Ramsey and Albert Lonzo (Lon) Ramsey, the youngest of seven children, on January 3, 1928 in Dexter, Arkansas. He grew up in Dexter and the surrounding areas. No matter where he lived as an adult, Arkansas was always his home. He loved all things Arkansas, especially Razorback sports. Wilbur and the absolute love of his life, Mary Dorothy Rutledge Ramsey, were married 63 years until her passing in 2012. He remained devoted to her until his last breath and missed her every day. One of the last things he said while looking at a picture of Dorothy was, “I am waiting on her.” She was waiting on him! Theirs was truly a love story people dream of; full of real love, commitment, devotion, adoration, and perseverance. It brings great joy to our broken hearts knowing they are together, holding hands again in Heaven. We know he is also so thrilled to finally be reunited with their youngest child, Richard Ramsey, who passed away in 1969. Wilbur was a devout and unwavering Christian, who still read three chapters of his Bible every night, and watched sermons every Sunday. He sang bass in gospel quartets for much of his life, recording an album at one time. He could sell anything, and loved to sell things, even maintaining an online business up until his last two weeks on earth. He loved all dogs and over the years had many. His last two dogs were his most cherished because they provided much focus and company after his beloved Dorothy passed away. In 2012, Wilbur moved into a full apartment Sharon and Billy built in the second floor of their home for he and Dorothy, after she had a paralyzing stroke. Dorothy passed away three weeks but in spite of her loss, Wilbur was happy living there surrounded by his family. Wilbur is survived by; his daughter, Sharon Ramsey Bush, his son-in-law William R. Bush, Jr., and only grandchild, Shannon Bush all of Hoover, AL. He has several nieces and nephews scattered around the country he truly loved. He will have a private burial in Memorial Park Cemetery-Whitehall, AR, next to his wife and son in the Ramsey family plot. And ye now therefore have sorrow: but I will see you again, and your heart shall rejoice, and your joy no man taketh from you. John 16:22

Wilbur Doyle Ramsey ascended into Heaven and the loving, waiting arms of his wife, Dorothy and their son Richard, on August 20. He was surrounded by his devoted daughter Sharon Ramsey Bush, son-in-law William R. Bush, Jr., and only granddaughter,... View Obituary & Service Information

The family of Wilbur Doyle Ramsey created this Life Tributes page to make it easy to share your memories.

Wilbur Doyle Ramsey ascended into Heaven and the loving, waiting...

Send flowers to the Ramsey family.