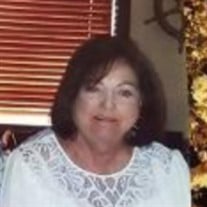 Wilma Faye Hatter Sellers April 5, 1949-May 7, 2020 Mrs. Wilma Faye Sellers 71 of Rock Creek, Alabama passed away at her home on Thursday, May 7, 2020. She was born in Tuscaloosa County on April 5, 1949, to Floyd and Lucille Hatter. She attended Brookwood High School where she was named Miss Brookwood in 1965. Faye married Terry Sellers on September 17, 1965. She was an amazing wife for 54 years; just as she was the love of Terry’s life, he was also the love of her life. Faye and Terry had two children during this marriage, Kristi and Craig whom she loved and treasured beyond measure. After being a military wife and mother, she joined the workforce. She became a Mary Kay Consultant, formed and ran her own cleaning business and in later years became a dedicated housewife and grandmother. Faye possessed a quality that alludes many, she loved everyone without conditions. She was a woman of mighty faith and a long-standing member of New Life Worship Center in Sylvan Springs. Proceeded in death by her husband Terry Sellers, parents, brother, Leon Hatter and sisters, Charlene Hatter, Barbara Chambers and Lisa Stanley. She is survived by daughter, Kristi Sellers Brock (Stan) of Rock Creek; son Terry Craig Sellers (Stephanie) of Oak Grove; two very special granddaughters, Lauren Noel Brock and Savannah Thomas; one sister, Sherri Brown of Brookwood; two brothers, Kenneth Hatter (Jackie) of Gulf Shores; Ricky Hatter (Ernestine) of Brookwood and many nieces and nephews that loved and adored her. A graveside service will be held at 2:00 p.m. on Wednesday, May 13, 2020 in the Patterson-Forrest Grove Memorial Garden in the Garden of Honor. Honorary Pallbearers will be her Nephews and Great Nephews. Mr. Ken Poe will be officiating the service. Social Distancing will be observed. The family will hold a memorial service later (TBD) to allow family members the opportunity to gather and honor her appropriately. Kristi and Craig would like to express their sincere gratitude to Southern Care New Beacon Hospice, Chaplain Frank Martin, and staff. They would especially like to express their gratitude to nurse Holly Garren, for a promise kept. The family request that memorials be made to The Wounded Warriors Project in Memory of Terry Eugene Sellers, former United States Marine. Information for the Alabama project is Wounded Warrior Alabama Project, 515 N Eastern Blvd. Montgomery, AL 36117. Phone: 844-448-3992 or for the National Project it’s Wounded Warriors Project, 4889 Belfort Road, Suite 300, Jacksonville, FL 32256. Phone: 877-832-6997. To donate online or to obtain a donation form, the web address is woundedwarriorproject.org.

The family of W. Faye Sellers created this Life Tributes page to make it easy to share your memories.

Customized sympathy cards. Mailed for you.