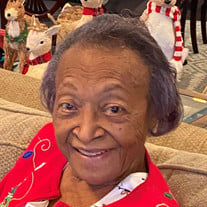 Virginia Myricks was born on May 17, 1926, in Birmingham, Alabama to Stephen and Easter Mae Myricks. Virginia is a graduate of Parker High School in 1944. She began her undergraduate studies were at Oakwood College and received her Natural Science degree from Miles College in 1949 while being a member of Club Rho Nu. In 1955, she received a graduate degree from Tennessee State University in Educational Psychology. She continued her Clinical Psychology studies at The University of Alabama from 1970 to 1971 resulting in a School Psychology certification issued from the State of Alabama. She met and married Rufus “Anthony” Points, and together, they had one daughter, Glennis. She began her career as an Elementary School Teacher then retired after 43 years from the Birmingham Board of Education where she worked as a Psychometrist. Virginia served her church, Ephesus Seventh Day Adventist, throughout the years as a soprano in the choir, and served as Chairman of the Ephesus Academy School Board. She is preceded in death by her husband of 52 years, Rufus Anthony Points, Jr.; her sister, Eleanor “Bay” Sims and brother, Thomas Myricks. She leaves behind her daughter, Glennis E. Points; granddaughters, Erin N. Richard and Audrey I. Bennett; stepdaughter, Terry D. Boney (Sam); step-granddaughter, Sydney B. Braughton (Hunter); nephew, Raleigh Myricks (Marva); cousins, Arvell Myricks Toles (Rev. Wesley), Raleigh Randolph and Beverly Kimball; future son-in-law, Clarence Rice; devoted son from another mother, Clifford Outlin; spiritual confidant, Patricia Washington; and many other relatives and friends. Visitation will be Sunday, February 20th, from 1:00 PM until 6:00 PM at Patterson Forest Grove Funeral Home. Graveside service will be Monday, February 21st at 12:00 PM Patterson-Forest Grove Memorial Gardens. Family requests mask be worn. Video of the funeral service is available for view on Patterson Forest Grove's Facebook page.

Virginia Myricks was born on May 17, 1926, in Birmingham, Alabama to Stephen and Easter Mae Myricks. Virginia is a graduate of Parker High School in 1944. She began her undergraduate studies were at Oakwood College and received her Natural... View Obituary & Service Information

The family of Virginia "Jean" Myricks Points created this Life Tributes page to make it easy to share your memories.

Send flowers to the Points family.