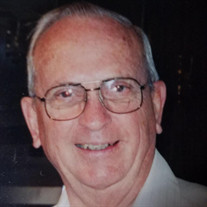 Raymond A. Camp, Jr., 93, of Birmingham, Alabama, passed away July 14, 2020. Mr. Camp served in the United States Navy during World War II. Two months after the bombing of Pearl Harbor on December 7th, 1941 Mr. Camp turned 15 years of age on February 12, 1942 and as the year progressed, he attempted to join the Navy. When he reported his birth date of Feb.12, 1927 he was told that he was too young to join. He returned shortly thereafter with a birth date of 1925 and was enlisted on October 26, 1942. Before the year ended, he spent the Christmas season aboard the USS Harris passing through the Canal Zone on his way to the Pacific. Once in the Pacific, he was proudly assigned to the USS Concord and escorted many convoys to Bora Bora for the Southeast Pacific Force. In 1943, the USS Concord carried Rear Admiral Richard E. Byrd along with a group of scientists on a trip to survey various remote Pacific Islands for possible airfields. Mr. Camp was a quartermaster and responsible for steering the ship which can be done from either the front or rear of the ship. During this trip Mr. Camp recalled that he was summoned from the rear to the front bridge when a gasoline explosion caused a fire in the rear of the ship. The crew fought the fire for days with few breaks except to eat. The Concord did not have a morgue and the only cool place to store the bodies was in the mess hall. He recalled having to eat while his best friend lay dead nearby. The fire resulted in the loss of 24 men. Repairs were completed in 1944 and the Concord was sent to the Aleutian Islands in the Northern Pacific where they participated in bombardment of the Kuril Islands preventing the Japanese from using the airfields and northern shipping lanes. After bombardment of the islands, the ships would steam away as quickly as possible. The USS Concord was often left to fight off the Japanese PT boats. Mr. Camp completed his service in 1946 within days of his 19th birthday. On December 25th, 1946 he married Geraldine Mathews. However, the effects of his time in the service to his country had not ended. He was later to discover that he suffered from a bacterial lung disease that was traced to the Pacific Islands. His early years of raising a family was disrupted by the time that he spent in Naval Hospitals in North Carolina and in Memphis, Tennessee. He would later retire after 30 years of service with US Steel. He later went to work as a Mall Security Guard. He was a member of the Masonic Lodge in Central Park and Pleasant Grove. He is preceded in death by his parents, Raymond A., Sr. and Alma Fern Camp; wife of 55 years, Geraldine Camp; sister, Peggy Thompson; and brothers, John Camp and Don Mathews. He is survived by his sons, Richard L. Camp (Dana) and Gary A. Camp (Deborah); daughters, Kathy Camp and Judy McCluskey (Eddie); grandchildren, Brandie Isbell (Billy), Jennifer Taylor, Matthew Camp, Daniel Camp, Emily Camp, Sarah Camp, Dominique Johnstone (Lance), Devon McCluskey (Candace); great grandchildren, Kane Taylor, Cole Taylor (Ashley), Cade Taylor, Caleb Johnstone and Kinsey Johnstone; great great granddaughter, Danielle Taylor; sister, Elizabeth Levan; and many other relatives and friends. Visitation will be Saturday, July 18, 2020 at 12:30 until 2:00 PM at Patterson Forest Grove Funeral Home. Graveside service will begin at 2:00 in Forest Grove Memorial Gardens.

The family of Raymond Augustus Camp Jr. created this Life Tributes page to make it easy to share your memories.

Send flowers to the Camp family.