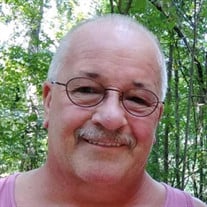 Randy Lee Jones arrived in Coffeville, KS, September 18, 1960 to his parents Zella (Roberts) Olson and Alfred Jones. He was preceded in death by his father, Alfred, and his step-father, Roy Olson. He is survived by his wife, Lee Anne Jones, Mom Zella, Sisters Tammie Kelley (John), and Rhonda Bishop (Jeff), daughter Lynne “Taz” Lee, son Aaron (Alexis) Lee, grandchildren Allie Lee, Ethan Hunter, and Lincoln Lee. He is also survived by his niece Tina (Devlin) Howe, nephews John (Laura) Kelley, and Ryan (Whitney Martin) Kelley, great nephews Bryce and Cody Howe, John Eugene, Logan and Dylan Kelley and Oliver Martin. Randy grew up in NW Indiana and he traveled many times back to Kansas and Oklahoma. Cub Scouts was a big part of his childhood and he was extremely proud of his polar bear badge which he got from spending 24 hours outside in weather below 32 degrees. He was lucky in love, had multiple adventures, reveled in mischief, and had fortunate accidents that all turned into fun stories to share. After high school, he traveled as an iron worker, sometimes with his dad, sometimes not, leading him to Houston with everyone else in the 80’s. After his Texas stint, Randy returned to Indiana, and after a few years, he moved to Birmingham, Alabama. There he married Lee Anne, his partner, his love, his heart, in the middle of the Locust Fork River, under the Swan Bridge. He drove a delivery truck across central Alabama for 24 years. Trucking gave Randy a sense of freedom because he was not meant to be stuck inside. He made many friends along the way, brought home softball size Chilton County peaches, and so much more. He liked driving those adventure-filled back roads. Randy loved excitement and the rush of new things. He never met anyone he couldn’t make laugh, it was truly one of his gifts. He loved heights, tall spaces, and zip-lined Colorado’s Royal Gorge. Dressing up for celebrations was something Randy usually instigated, and he absolutely loved it. Elvis, Jack Sparrow, the Aflac duck, and Dia de los Muertos faces along with so many more characters. He loved bringing his NASCAR cardboard box cars to the races in Talladega, Alabama. Many of us were lucky to get a ride. Randy loved his music, especially Stevie Ray Vaughn, Johnny Winter, Grace Potter, and ACDC (hence his nickname “Angus”) and it was always on no matter what he was doing. He was also a folk artist and he left his art all over his home and yard. Randy could build something beautiful out of nothing and he was always happy and at peace when he was creating. Ethan, his grandson, was his buddy and we can all see Randy in him. Randy loved his family by seeing how high he could push us to fly. He will be missed by many and his family will have a memorial in the early summer. Randy was so much more than the words written here. We will miss him, love him, and wish he were with us always.

Randy Lee Jones arrived in Coffeville, KS, September 18, 1960 to his parents Zella (Roberts) Olson and Alfred Jones. He was preceded in death by his father, Alfred, and his step-father, Roy Olson. He is survived by his wife, Lee Anne Jones,... View Obituary & Service Information

The family of Randy Lee Jones created this Life Tributes page to make it easy to share your memories.

Send flowers to the Jones family.