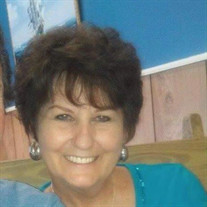 Nelda Faye Wallace Kennedy, 73 of Hueytown, Alabama passed away April 21, 2021. She was a long time member of Lowerytown Baptist Church in West Blocton. She was always seen with a smile and full of love and compassion towards others. She is... View Obituary & Service Information

The family of Nelda Faye Kennedy created this Life Tributes page to make it easy to share your memories.

Send flowers to the Kennedy family.