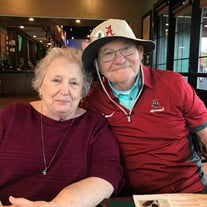 Nancy Elizabeth Boone of Pleasant Grove, Alabama went to be with the Lord on March 15, 2020. She was born on August 7, 1940 in Jonesborough, Tennessee. She was adopted on September 7, 1945 by Aughtie Self Batson and John Daniel Batson of Concord, Alabama. She was preceded in death by her parents and brothers: John Quincy Batson, Tom Allington and Ray Ashby. She is survived by her sister, Betty Giles of Rosman, North Carolina. She is also survived by Hershal Erwin Boone, her loving husband of 62 years, their five children: Theresa Boone Kanute (Steve) of Pleasant Grove, Jeff Howell Boone (Tammy) of Pleasant Grove, Kelli Boone Lawhon (Phil) of Vestavia, Jon Erwin Boone (Debbie) of Hoover, and Scott William Boone (Leigh Ann) of Sterrett, 15 grandchildren: Jennifer Gaddis, Stephanie Wood (Walter), Amy Hendrix (Chris), Stephen Kanute, Justin Boone (Devanne), Breanne Boone, Jonathan Lawhon, Mary Elizabeth Lawhon, Sam Lawhon, Jackson Boone, Claire Boone, Charlie Boone, Caroline Boone, Isabelle Boone and Catelyn Boone and 6 great-grandchildren: Jake Gaddis, Emmie Gaddis, Josh Gaddis, Walter Wood, Oliver Wood and Harper Boone. Mrs. Boone was a graduate of Hueytown High School where she played the clarinet as a distinguished member of the marching band. Her love of music carried on as she studied at Birmingham Southern College and eventually taught piano for over thirty years. She was a devoted woman of the Lord and a charter member of Faith Free Methodist Church in Pleasant Grove where she also served as pianist. Her life’s work and greatest legacy were to her five children and the eighty babies she and her husband loyally fostered through Lifeline Children Services, as well as the countless children she cared for at First Baptist Church Daycare in Pleasant Grove where she was lovingly known by all as “Granny”. A visitation will be held on Wednesday, March 18, 2020 at 1:00 pm at Patterson-Forest Grove Funeral Home in Pleasant Grove, Alabama. The funeral service will begin at 2:00 pm followed by a graveside service with Rev. Joe Shuffett and Rev. Lewis Bunn officiating. The family would like to thank the nurses and staff of Hospice Services of Alabama for their loving care for Mrs. Boone. In lieu of flowers, donations may be made to Faith Free Methodist Church of Pleasant Grove.

Nancy Elizabeth Boone of Pleasant Grove, Alabama went to be with the Lord on March 15, 2020. She was born on August 7, 1940 in Jonesborough, Tennessee. She was adopted on September 7, 1945 by Aughtie Self Batson and John Daniel Batson of Concord,... View Obituary & Service Information

The family of Nancy Elizabeth Boone created this Life Tributes page to make it easy to share your memories.

Nancy Elizabeth Boone of Pleasant Grove, Alabama went to be with...

Send flowers to the Boone family.