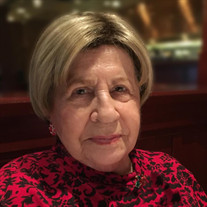 Mary Pappas Williams, 95, of Birmingham passed away peacefully March 11. She was preceded in death by her parents, Callie and Tom Pappas; husband, Roy Williams; sisters, Anna Vince of Ft. Wayne, Ind., Blanche Pappas of Birmingham and Helen Lasho of Marion, Iowa; and her dearest friend, Joanna Hahamis Carlock of Birmingham. Born in West Virginia, she grew up in Ft. Wayne, where she graduated from Northside High School. She served as president of the Ft. Wayne Chapter of Daughters of Penelope. She later moved to Birmingham and worked at Baggett Transportation Co. for many years before she and her husband moved to Pinellas Park, FL. In Birmingham, she served as president of Senior Greek Orthodox Youth of America (GOYA) and was crowned “Queen Joy” at the annual coronation ball of GOYA. In Pinellas Park, she retired from GTE, was a member of St. Stefanos Greek Orthodox Church and volunteered in various causes. She remained there until moving back to Birmingham six years ago. She was quite a character, humor being her greatest asset. Practical joker, prolific reciter of limericks and funny rhymes and a quick wit were her trademarks. She savored a chocolate martini for dinners out, and she never lost that sense of humor, even in her final days. While in Florida, she discovered she had a flair for poetry, was honored by the Tampa Bay Poetry Foundation and inducted into the Poetica Hall of Fame at the Official U.S. National Poetry Ceremony. At 94, she could still recite some of her and her husband’s poems from memory. A great dancer, she was able to do the twist into her 90s and amazed staff at independent living when she twisted nearly to the floor. She is survived by: nieces and nephews, Greg Pappas, Vickie Pappas, Carol Pappas, Tom Vince, Becky Vince and Steve Lasho; and a host of cousins, great nieces and nephews. Visitation will be held Saturday, March 13, at 11:30 a.m. at Holy Trinity-Holy Cross Greek Orthodox Cathedral in Birmingham. Service will follow at noon with Fr. Micah Hirschy officiating. Burial is in Forest Grove Memorial Gardens. Patterson-Forest Grove Funeral Home will direct. COVID-19 safety precautions will be observed. The family thanks Edith Sykes and Angel of Mercy for their compassionate care during her illness. In lieu of flowers, the family encourages donations to Holy Trinity-Holy Cross Greek Orthodox Cathedral.

The family of Mary Pappas Williams created this Life Tributes page to make it easy to share your memories.

Send flowers to the Williams family.