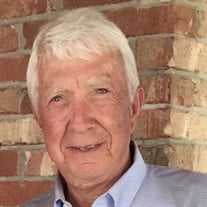 Ken Eichhorn passed away on September 30, 2019. He was born September 12, 1935, in Pittsburgh, Pennsylvania to John George and Mamie Donley Eichhorn. After graduating from Langley High School, he enlisted in the Army and trained at Fort Huachuca, Arizona to be a Morse code operator. He then enrolled at the University of Pittsburgh and graduated with a bachelor’s and a master’s degree in social work. While he was a psychiatric social worker, he reenlisted in the Army reserve and received a commission as an officer. In 1980, he accepted a full-time position in the Army as a medical service corps recruiter and was assigned to the recruitment center in Birmingham, Alabama. He moved his family to Pleasant Grove, Alabama and resided there until his passing. During his distinguished military career, he rose to the rank of Colonel before retiring in 1996 with twenty years of service. After his career in the Army, Ken worked at Lloyd Noland Hospital. Ken was a devout Christian and active in many churches throughout his life. While in Pittsburgh he attended Lorenz Avenue Baptist Church, where he met Virginia Lee Roycroft. They married in 1960 and had three children: Susan, Tom, and Erik. They were married for 52 years until Virginia passed away in 2012. They also attended Sheraden Christian and Missionary Alliance Church where he taught Sunday school, was a deacon, and sang in the choir. After moving to Birmingham, they attended McElwain Baptist Church and Bethel Baptist Church and were very active in both churches. Ken was devoted to his family and friends. He and Virginia enjoyed traveling with their family and their Sunday school class. He also enjoyed music, was an avid reader, and a die-hard Pittsburgh Steelers fan. He was a man with strong faith and a great Christian role model for anyone who knew him, as well as being a wonderful father and grandfather. He was a kind, gentle, and thoughtful man and he will be missed very much, but we know he is joyous to be in heaven and reunited with his beloved Jenny Lee. He is survived by his sister Miriam Wolf; daughter Susan McGuire (William); sons Tom (Rhonda) and Erik (Sherri); grandchildren Megan McGuire, Katie Estes (Shannon), Will McGuire, Daniel Eichhorn, Emily Eichhorn, Victoria Stack, Sarah Stack, Gordon Eichhorn, Dawson Eichhorn, Autumn Eichhorn; special sister-in-law and brother-in-law Joyce and Bob Hughes. A visitation will be held Friday, October 4, 2019 at 10:00 AM followed by a memorial service at 11:00 AM at Patterson-Forest Grove Funeral Home, 1498 5th Avenue, Pleasant Grove, Alabama 35127.

Ken Eichhorn passed away on September 30, 2019. He was born September 12, 1935, in Pittsburgh, Pennsylvania to John George and Mamie Donley Eichhorn. After graduating from Langley High School, he enlisted in the Army and trained at Fort Huachuca,... View Obituary & Service Information

The family of Ken Eichhorn created this Life Tributes page to make it easy to share your memories.

Send flowers to the Eichhorn family.