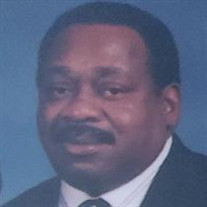 On February 13, 1935, James Willie Samples, was born in Selma, Alabama to the late Olivia Jones Stanford. He was a member of Faith Chapel, Birmingham, Alabama. James was educated in the Bessemer City Public School System, where he attended Paul Laurence Dunbar High School. On September 18, 1956, James was united in holy matrimony to Mrs. Iris Jean Richardson Samples. To this union God blessed them with five sons. In his early life he worked numerous jobs in and around Bessemer, AL which included Bessemer Apothecary among others in support of his siblings and family. His working career started at US Pipe and Pullman Standard in Bessemer as a laborer, but he took the initiative to improve his employment status and learned the trade of welding by taking classes at night. After receiving his certification as a welder, his job opportunities steadily increased until he reached the level of General Foremen of the shipping track at Pullman. He worked in that capacity until the plant closed in the early 80’s. Still during this time, he managed to take on part-time jobs. Some of the jobs included loading/shipping supervisor at Bowman Transportation, as well as the night shift concierge/bellman at the newly built Sheraton Hotel in Birmingham. Always looking to help out, he was instrumental in securing employment for many friends and family at his place of employment while also taking the time out to build a community baseball stadium with a close friend and his sons. That park still exists today at Hard Elementary in Bessemer. His passion was baseball and he showed that by coaching and mentoring talented kids in and around town and his teams were quite successful. He was consistently busy for many years. After the closing of Pullman Standard, he accepted a position as a foreman at Calpro; TTX (Pullman Standard parent company), in Riverside CA. He not only worked there; but also worked for the City of Riverside CA on the weekends. He worked at both locations for nearly 20 years. After retiring from Calpro in 2000, he moved back home to Hueytown, AL. Being the usually busy bee, “Samp” took on several after-retirement employment opportunities around Birmingham until he reluctantly retired for good in early 2015. He loved watching baseball and football and discussing the outcomes of the games with his wife and sons. He also enjoyed whipping up a dish or two in the kitchen. He truly loved cooking various dishes and seeing people enjoy the fruits of his labor. In his ladder years, he enjoyed watching western movies and shows, and occasionally watching and listening to gospel singing. He was not a man of many words, however he made sure the words he did speak was heard. He was a loving husband and dedicated father that would give his last in support of his family. He is preceded in death by his mom Olivia Jones Stanford, brothers Carl Lee Stanford, Herman Stanford, sister Iris Denise Stanford Washington, daughter Olivia Faye Mack, and son, Reginald Theodore Samples. He is survived by his wife of 64 years Mrs. Iris Jean Richardson Samples; four sons, Michael James Samples (Rosalind),Fairfield, AL, Jeffrey Wayne Samples (Torria), Hoover, AL, Tommy Barnard Samples (Sanquenetta) Mableton, GA, and Cedric Wade Samples (Joella) Richland, WA; three brothers, Ossie Lee Minor of Birmingham, Will P. Stanford ( Shirley Ann) of Montgomery, AL and Arthur Stanford of Denver, Colorado; one brother in law, Alvin Richardson of Birmingham, AL Thirteen grandchildren Mairo Samples (Tyeisha), Tamika Samples, Deon White, Cordarius Samples (Alesha), Deric Samples, Desmond Samples, Tyler Samples, JeTori Samples, DeShawn Samples, JeTaelar Samples, Zoe Samples, Danyka Samples and JeTia Samples; and two great grandsons Joshua and Jordan Samples and a host of niece, nephews, cousins and friends. Visitation will be Friday, October 23, 2020 from 1:00 until 6:00 PM at Patterson Forest Grove Funeral Home. Graveside service will be Saturday, October 24, 2020 at 12:00 PM in Patterson Forest Grove Memorial Gardens. Rev. Frank Lawrence officiating. Social distancing and masks are required.

On February 13, 1935, James Willie Samples, was born in Selma, Alabama to the late Olivia Jones Stanford. He was a member of Faith Chapel, Birmingham, Alabama. James was educated in the Bessemer City Public School System, where he attended Paul... View Obituary & Service Information

The family of James Willie Samples created this Life Tributes page to make it easy to share your memories.

Send flowers to the Samples family.