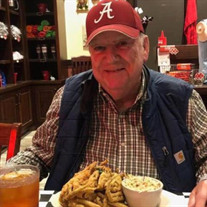 Cash, Gilbert Davis (80) of Concord, Alabama passed away at his home on June 14, 2021. He was born in Millport, Alabama on October 8, 1940, the son of the late Walden Guy Cash and Ruby Cunningham Cash. He attended schools in Lamar and Jefferson Counties and graduated with the Class of 1959 from Hueytown High School. He was a devoted husband, brother, father and a greatly loved “Dee” to his grandchildren and great-grandson. He is survived by his wife of 50 years Brenda Walker Cash, having just celebrated their anniversary on June 11th. He is also survived by his children, Dr. B.J. Cash (Amy) of Vernon, Alabama, Mary Melinda Sanshu (Troy) of Lakeview, Alabama, Justin David Cash (Kacey) of Rock Creek, Alabama and grandchildren, Dr. Rebecca Cash, Zachary Cash, Caitlin Childers (Justin Birchfield), Ashley Childers, Brynley Quackenbush, Matt Cash, Colton Cash, Khloe Waldon and Aeiva Shae. His great-grandson, James Cash Birchfield, proudly bears the Cash name in honor of “Dee”. Additionally, he is survived by his sister Charlotte Korzun (Jim) of Gulf Shores, Alabama, his brothers, George Cash of Pleasant Grove and Carter Cash of New Mexico and his brother-in-law, Thomas Walker, Jr. (Betty) of Montevallo, Alabama. Gilbert had a tremendous work ethic that he attributed to his beloved grandfather, Morris Cunningham. He worked and retired from Chevron Oil Company, then obtained his Master Electrician Certification. He worked as an electrician and electrical contractor for several years before becoming an electrical inspector for Jefferson County. He retired after 10 years with the county inspection service in 2005. Gilbert was an avid gardener, producing large crops that he shared with family and friends, keeping shelves and freezers full throughout the years. He was a longtime member of Rock Creek Church of God. He enjoyed hunting and fishing, traveling all over the state, the country and even into Canada to pursue. But one of his greatest joys, was to cook. He loved preparing meals for family and friend gatherings, for church outings, for his hunting buddies and for family and school reunions. His adaptation of his “Aunt Kate’s Dressing” was quite frankly the best thing you could ever put in your mouth. During his last 18 months, he battled Acute Myeloid Leukemia. He fought valiantly with dignity, courage and amazing grace. The family would like to thank his medical team at the Hematology-Oncology Infusion Center at the Kirklin Clinic, Dr. Vachhani, the Concord Fire Department, Comfort Care Hospice and a community of friends and neighbors who stepped up to help Gilbert when he needed them the most. The family would also like to acknowledge Gilbert’s friends Earl Shaw, Steve Clark and Larry Simpson, whose friendship and caring phone calls and visits bolstered his spirit and gave him a lot of joy. In lieu of flowers, the family asks that you consider donations to The American Village, The Leukemia/Lymphoma Society or Rock Creek Church of God. Visitation will be Wednesday, June 16, 2021 from 12:00 until 1:00 PM at Rock Creek Church of God. Funeral service will begin at 1:00 PM with burial in Patterson Forest Grove Memorial Gardens. Brother Jonathan Absher officiating.

Cash, Gilbert Davis (80) of Concord, Alabama passed away at his home on June 14, 2021. He was born in Millport, Alabama on October 8, 1940, the son of the late Walden Guy Cash and Ruby Cunningham Cash. He attended schools in Lamar and Jefferson... View Obituary & Service Information

The family of Gilbert Davis Cash created this Life Tributes page to make it easy to share your memories.

Cash, Gilbert Davis (80) of Concord, Alabama passed away at his...

Send flowers to the Cash family.