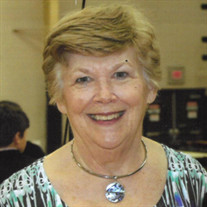 Carol Posey Leeth, age 79 of Hoover, Alabama, peaceably passed away on Thursday, March 26, 2020. Carol was born on July 17, 1940 in Birmingham, Alabama. She was the daughter of the late Carl and Myrtle Posey. Carol grew up in the Bush Hills neighborhood of Birmingham and attended Ensley High School, class of 1958. She attended The University of Alabama where she was a member of Phi Mu sorority. Carol worked for Alabama Power Company until she married Roy Leeth in 1963. They moved to Opelika, Alabama where Roy was employed by Uniroyal Tire Company and she became a successful Realtor. After retirement, Carol and Roy moved back to Birmingham to take care of their aging mothers. Carol was very active in the First Baptist Church of Opelika and later helped solidify The Church at Brook Hills in Birmingham. Carol pursued the things that made her heart come alive: the stage, art, music, leadership. She took a colorless world and made it a rainbow. Carol let her colors flow with acrylic paints on denim shirts, art lessons, ceramics, The Opelika Arts Association, wedding coordination, interior decorating, hosting, cooking, acting, organizing, real estate, and administrating a home with three boys and a husband. She did all things with flare and charisma. Carol is survived by Roy, her husband of 57 years and their 3 sons: Scott Leeth (Boudhsalinh), grandchildren, Rachel Munoz (Sebastian), Josiah, Akira and Akia of Dahlonega, Georgia; Alan Leeth (Tamsin) and grandchildren, Davis and Kate of Shoal Creek, Alabama and Clark Leeth (Toni) and grandchildren, Emma and Virginia of Mountain Brook, Alabama. Carol is also survived by her brother, Carl Posey of Birmingham and sister, Pat Hair of Huntsville, Alabama. A graveside service for family will be held at Elmwood Cemetery in Birmingham. Rev. Rick Ousley will be officiating. In lieu of flowers, the family suggests that memorial gifts may be made to your favorite charity. A memorial service celebrating Carol’s life will be announced at a later date.

Carol Posey Leeth, age 79 of Hoover, Alabama, peaceably passed away on Thursday, March 26, 2020. Carol was born on July 17, 1940 in Birmingham, Alabama. She was the daughter of the late Carl and Myrtle Posey. Carol grew up in the Bush Hills... View Obituary & Service Information

The family of Carol Posey Leeth created this Life Tributes page to make it easy to share your memories.

Send flowers to the Leeth family.