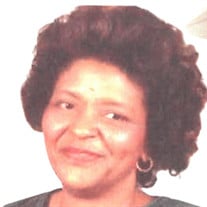 Annie Boykin Garrett, 95, of Birmingham, passed away on April 25, 2022. She was a longtime member of Ford&#8217;s Chapel CME, served on the Stewardess Board, was chairman of the Usher Board, and was a Sunday school teacher. A current member... View Obituary & Service Information

The family of Annie Boykin Garrett created this Life Tributes page to make it easy to share your memories.

Annie Boykin Garrett, 95, of Birmingham, passed away on April...

Send flowers to the Garrett family.